The purpose of machine programs is to provide a simple and flexible formal language that can be quickly understood and enable those who are unfamiliar with programming languages to formalize algorithms. Since their control flow is not confined by a predefined set of control structures they can be constructed from traces in an intuitive manner, which facilitates the implementation of algorithms with complex control flows. A trace is the sequence of steps caused by the execution of an algorithm (see below for examples; ex. 1 and ex. 2).

As stated previously, a machine program can only be interpreted with respect to a model of computation. Therefore we have to familiarize ourselves with such models first. We will look at three examples of such models and then consider the general definition.

Imagine you are in a factory that produces gummy bears. There are two big funnels labeled sugar and dye which contain pieces of sugar and food dye, respectively. Beneath these two funnels is a large container called mixer. To produce gummy bears sugar and dye have to be put into the mixer in the right ratio. In order to do this there is a small control panel with two buttons and two indicator lamps:

One gummy bear consists of 3 pieces of sugar and 2 pieces of dye. Every morning the funnels are refilled with sugar and dye. After the funnels have been filled it is guaranteed that

How can the machine be operated such that the maximal amount of gummy bears can be produced every day?

You are in a labyrinth which is represented as a square grid. A square is either a wall or walkable. You can turn left or right by 90° and you can move a step forward. Since the labyrinth is dark you can only see whether there is a wall directly in front of you or whether you have reached the exit.

How can you find the exit without knowing the layout of the labyrinth?

A model of computation has two components called operations and predicates although we used different names in the examples:

In our examples the models of computations were presented in conjunction with a particular task. In general, there can be different tasks for a model of computation. For example, instead of the sum on the 3-counter machine one could ask for the maximum: operate the machine such that the maximum number over what is contained in register 1 and 2 is in register 3 at the end.

Models of computations are a very simple yet broadly applicable theoretical concept. For example, it is possible to encode Turing machines, finite state automata and pushdown automata or instruction set architectures (with certain limitations) as models of computation. The interactive presentation of such models also makes them suitable for teaching the basics of algorithmic thinking without even needing a programming language.

Now we are ready to define machine programs and give some examples. At the end of the page you can find a simple interpreter for k-counter machines.

When we execute an algorithm on a machine we push a sequence of buttons until the algorithm ends. To decide what button to push next (or whether to stop) we look at the indicator lamps. However, what button to push next does not solely depend on the indicator lamps but also some internal state that we keep track of in our mind. We call this a program state. For example, in the case of the gummy bear factory we had to remember how many pieces of sugar and dye still needed to be released into the mixer for every iteration. 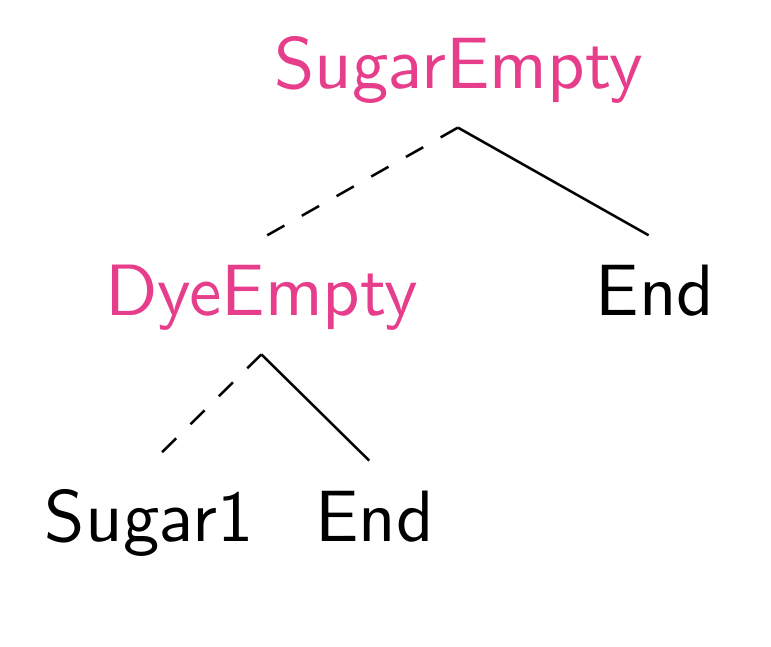 This BDT is read as follows. We start at the root node SugarEmpty. Since it is a predicate we look whether it is true (meaning the indicator lamp is active). If the predicate is true then we follow the solid line (right child); if it is false then we follow the dashed line (left child). This BDT states that execution should end when the sugar or dye funnel are empty. Otherwise one should continue with the program state Sugar1.

Next, let us consider a slightly more sophisticated example. The following diagram shows a machine program for addition on the 3-counter machine.

In the context of our labyrinth example it is possible to implement Pledge's algorithm as machine program to find a way out of the maze. The idea is to remember the number of turns made modulo 4 using program states.

Suppose we have a machine program P for a model of computation M. Oberseve that P takes a machine state as input and returns one as ouput (the result of the computation). In that regard it qualifies as an operation of M. Therefore if we build another program P' for M we can use P as if it were an operation of M. This means a program state of P' can be associated with P as operation. However, there should not be any cycles in the subprogram call graph, e.g. if P' calls P then P cannot call P'.

This does not increase the expressiveness of machine programs since the calls to the other programs can be compiled into the new program yielding a semantically equivalent one without subprogram calls.

Below is an interpreter for k-counter machines which has the above machine program for addition as default example. The BDTs are encoded as indented trees using tabulator characters. The first child in the string representation corresponds to the left child, which is taken if the predicate of parent node is false.